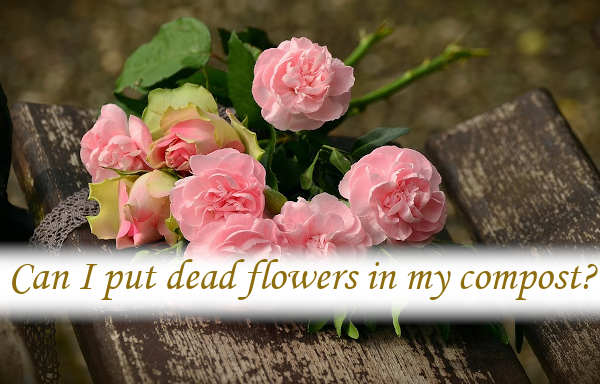 What do you need to add to dead flowers?

Can you compost geraniums?

Can you put rose clippings in compost?

Can you put berries in compost?

Can you compost diseased plants?

What leaves should not be composted?

Flowers in full bloom brighten the world for everyone. There’s something about colours that lift us, even if it’s just for a moment. The scent, if there is any, is a bonus. But flowers never last long enough. When they’ve lost it, they have to go. Then, comes the downside of having cut-flowers, when they go over. You have to take them out of the vase and put them out with the trash. Or you may think of asking: Can I put dead flowers in my compost?

Dead flowers are organic, in the true sense of the word. Anything that’s organic will rot down into compost. A compost heap, pile or bin, will take dead flowers and turn them into compost. You may want to put them through a shredder, if you feel like it, it’s not a requirement.

Shredding of everything that goes in the compost will ensure faster rotting. You may not feel like doing this to dead flowers. You may just want to lay them to rest and walk away. They will blend in with everything else.

Some will tell you that dead flowers are a ‘green’ in the compost mix. When flowers reach the point where they are gone over, they will have regressed to a state of being, mostly, dried out. This puts them partly in the carbon ‘browns’ camp when it comes to assessing the balance of the composting mass. The thing is, there will still be a ‘green’ element in there because, although we say they’re dead flowers, they won’t necessarily be completely dead.

Dead flowers are generally a balanced mix within themselves. This is to say that if you had a compost heap, pile, or bin full of nothing but dead flowers, they would rot down into compost by themselves.

About dead flowers in compost

What do you need to add to dead flowers?

There are two ingredients that you may need to add to add to dead flowers when making compost. The first is water. This may only be necessary if you’ve loaded in a large number of dead flowers and they are particularly dry.


The second ingredient has to be hydrated white lime. This will neutralise the acids that are generated when compost is forming. General garden clippings and trimmings will rot down without white lime but it will take a while longer. Hydrated white lime is of most use when making compost from ‘green’ kitchen waste.

Can I put dead flowers in my compost? Yes. They will rot just like vegetables.

Can you compost geraniums?

You can compost geraniums. If you have, dead, end-of-season geranium flowers that you need to dispose of, these can go in with the compost. They will become moist and rot down along with everything else.

The question here, may also be; what about any seeds that the dead geranium flowers carry into the compost? Will geranium seeds germinate in the compost?

The purists in the composting world will tell you that a well-managed compost heap, pile or bin will heat up. The heat generated in compost will be enough to ‘cook’ some of the seeds, rendering them useless. This is all about striking the right balance of ‘greens’ and ‘browns’ in the compost.

You will achieve this some of the time without trying too hard. It rarely happens so comprehensively that every seed will be destroyed. There will always be some that will find a ‘safe’ cool area in the compost where nothing will happen to them.

These seeds will have a chance to germinate in your compost. But that’s okay because you will see them when you visit the compost with fresh waste to load in and you can decide on what you want to do with these seedlings.

Can you put rose clippings in compost?

You can put rose clippings in compost. If you have a small compost bin, you will need to shred the rose clippings. Shredding will smash the tough parts of the rose stems and break up the thorns. Shredded material of any kind will rot down faster in compost, than if you leave it as whole twigs or sticks.

Some people make a big issue about having sharp thorns in the compost. When they’ve been in damp compost for a few months, they will lose their sharp point. But when it comes to handling finished compost, it makes sense to wear thick gloves, just in case there is anything sharp in there.

If you have a large, ever growing, compost heap and plenty of room, shredding of anything may not be necessary. Dead flowers, sticks and twigs with thorns on them will all rot down over time.

Can you put berries in compost?

You can put berries in compost. Think of these as you would any other fruit. In compost, they can be classified as a ‘green’. There will be an acidic element with berries as with most fruits. This may require the addition of hydrated white lime to neutralise the acidity which can build up in compost.

Can you compost diseased plants?

Diseased plants will make compost but it’s not a good idea to put diseased plants in compost. Plants that are diseased with blight, may contaminate the compost and carry the disease over into the next season. If you have diseased plants, it may be better to burn them rather than risking problems in your compost.

If you do burn diseased plants or anything else, please set up a fire that burns well and burns at a high temperature. This will get rid of everything quickly. The worst type of fire is a smouldering heap that sends out lots of smoke and upsets the neighbours.

Alternatively, if you’re not happy about having a fire, place diseased plants in a separate bin, preferably sealed. This will keep any potential trouble away from your main compost. The contents of the separate bin can be left alone to rot down into compost.

The best thing that can happen is that worms are introduced as the compost is forming.They will eat the fungal material that’s made the plant diseased. You may need to allow a longer period of time for this compost to become compost that’s ‘clean’ of disease, thanks to the worms.

What leaves should not be composted?

There’s the Black Walnut. A native of North America and much celebrated for the dark timber that it produces. The Black Walnut fruits are prized for their taste. The tree is known to be allelopathic. This describes the ability of a plant, of any size, to produce and release chemicals, in a variety of forms, that actively hinder forest-floor competitors; they want the place to themselves.

The other type of tree that produces leaves that have a similar effect as the Black Walnut, is the Eucalyptus tree. A native of Australia, the Eucalyptus leaves have been shown to contain the presence of phenolic compounds.

The oils that can be collected from some Eucalyptus leaves, are being described as a natural disinfectant. In large quantities it’s believed to be toxic.

So, that’s it, something to bear in mind when gathering dead leaves.