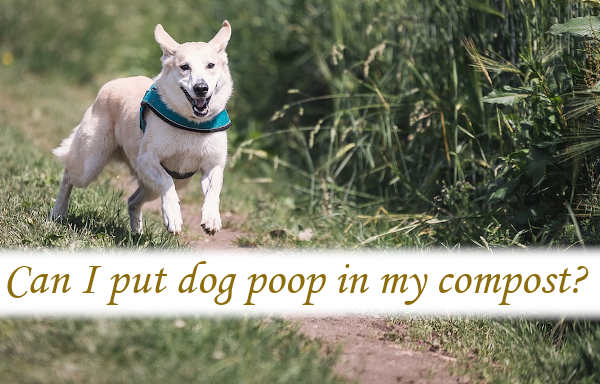 Also: Can I bury dog poop in my garden?

Why does dog poop go white?

Can you put dog poop in a septic tank?

I’ve spoken to people who keep a dog, or a number of dogs, and they all say that they wouldn’t be without them. Having such a welcoming and eager companion makes a big difference when you contrast your dog’s attitude to life compared to some who you may know. I once heard it said by someone who had to deal with people all day long, ‘The more I see of the general public, the more I like my dog’.

There’s only one down side that we have to deal with when we keep a dog. When we go for walkies or just let them run in the garden, there is going to be the inevitable dog poop. We can’t leave it lying around; it’s antisocial. A question that many are asking: Can I put dog poop in my compost?

You can put dog poop in your compost. There are precautions that must be taken when handling dog poop. Allow plenty of time for dog poop to fully convert into compost. If a compost bin is collecting dog poop on a regular basis, you need to make sure that the compost is allowed to mature for at least a year.

Nature will do its thing. The bacterial microbes will sort everything out for us while we sleep. When they’ve finished with it, the worms will start. After many months going by, we can take out compost and there is no clue of what it’s generated from, except for the give-away of the odd little sticker that’s come through from a rotten piece of apple.

Making compost, somehow, cleanses. It renders safe the mankiest of mank that we need to get rid of. This is all very well when we want to make mouldy food disappear and messy scrapings from plates to be out of sight and out of mind. But where are we left when it comes to those regular morsels that our faithful friend leaves behind?

Can I put dog poop in my compost? Yes but only if you use lime and leave it for a good while.

I don’t know anyone who can handle the arisings from the dog, or even talk about it without a grimace, and with good reason. Few people know what there is in dog poop There’s no reason to investigate it because just looking at it and having a mere thought about it is enough for most of us to cope with.

Dog poop is different. It can’t be said that it’s special, just different. It, therefore, has to be given preferential treatment if we want to put it through the standard compost system that we use for all our organic waste.

There are risks with dog poop that can’t and mustn’t be ignored. Dogs, whether we like it or not, have the most disgusting of habits when it comes to eating things that they find. They have, by their nature, a very keen sense of smell. They have the ability to sniff out the most disgusting substances that have been generated from other life forms including that from other dogs.

Dogs pick up parasitic worms. One of the groups of worms that they pick up are known as ‘Roundworms’.There’s nothing that we can do about this. It doesn’t matter what you do to try and stop it, it’s going to happen. There is a risk that these parasites may survive the composting process and find their way into local humans who are doing the handling. A whole list of potential medical complications awaiting anyone who asks what happens if you ingest dog poop that’s infested with the eggs of this parasite or that. You can take a dog to the vet and go through a worming program that will get rid of them but the effect will only last for a while.

Some say that it’s not wise to attempt to turn dog poop into compost. There is the option of flushing it down the domestic toilet or sending it off to landfill. If you’re walking the dog in a public park and there is an arising to deal with, this can often be deposited in a designated bin for dog litter. It then either goes to landfill or is incinerated.

All of this makes for uncomfortable reading but it’s better that we know than not. So, what might we do about turning dog poop into compost without allowing problems from it revisiting us at any point in the future from the compost that it will make?

It’s all about getting the compost to heat up. This is something that will happen in a compost heap without too much effort on your part. If the dog poop is subjected to heat, this will kill the parasite and, more importantly, kill the eggs or any larvae that may be present.

The problem is that there are some parts of the heap that may not get hot enough. The outside regions of a compost heap aren’t going to be as hot as the central regions of the mass as a whole. This is where there may be some risk. To get around this, you need to target an area on the heap where you place the dog poop. The best place to put it is in the middle at the top of the heap. Bury it in just a little way to prevent it from rolling down to one side. This will avoid any risk of it finding a cool region.

Hit or miss isn’t really good enough when there’s likely to be an element of risk. There is a work around for this that’s worth considering. Here at Rolypig.com you will often read mention of hydrated white lime. This a safe-to-use naturally occurring powder that’s produced from finely ground limestone.

Its primary function in a compost heap, pile or bin, is to neutralize the acids that are generated in the composting process. When this is achieved, decomposition will happen much more quickly and efficiently, compared to acidic conditions.

So, what has this got to do with dog poop? If you completely cover dog poop with white lime, it will dry out. The lime will draw all moisture from it. This will kill any parasites, larvae and eggs.

The best way to achieve this, and to make the white lime work well for you, is to get a bag of hydrated white lime. You then need to get a bucket with a lid. Put a layer of about ½ inch in the bottom of the bucket. When you have an offering of dog poop, place it in the bucket on the white lime and just leave it there.

Allow a couple of weeks for the most recent additions to the first bucket to dry thoroughly. Then you can start adding the entire contents of the first bucket to your compost. The white lime will be of use to the rest of the compost in the heap and the dried out dog poop will begin to decompose when it becomes moist from the damp mixture of everything else in the heap.

A word about the hydrated white lime

This is available in large bags. A bag will last for a long time which means that you need to store it correctly. It must be stored away from any sources of moisture. Any level of dampness, including atmospheric moisture, will be drawn into the lime and it will become hard, like cement. It’s the ability to draw moisture that makes it so useful for treating dog poop.

So, you need a secure way of storing hydrated white lime. A bucket with tight fitting lid would be ideal or a strong plastic bag to hold the original bag and tie it off.

Can I bury dog poop in my garden?

A designated compost bin for just dog poop would, probably, never fill up. This would keep your main compost bin or pile, ‘clean’ of dog poop, which has to be a good thing.

With all the stigma and parasitic complications that dog poop carries, we have to acknowledge that it’s an organic material. Any organic material will decompose and release nutrients that are of use to growing plants and that includes dog poop.

Why does dog poop go white?

The white that you sometimes see on dog poop is mould fungi. This is the first stage of decomposition of any organic material. When you see this, it means that the poop has been in that place for a few days. It is also an indication that there are nutrients in the poop that fungi can make use of.

Can you put dog poop in a septic tank?

If in asking this, we mean lifting the lid of a septic tank every time we have dog poop to dispose of, the answer has to be don’t. The less you have to do with a septic tank the better it will be for you and everyone around you.

However, you could flush dog poop down the domestic lavatory but this means bringing a daily offering in to the house. You may want to think twice before you do this.

As an organic material there should be no problem doing this. If you have a good fire going, then this is an option. Just make sure that the fire is burning at a high temperature. No one will thank you if you have smouldering dog poop on a weak and smokey fire.

The dog in question