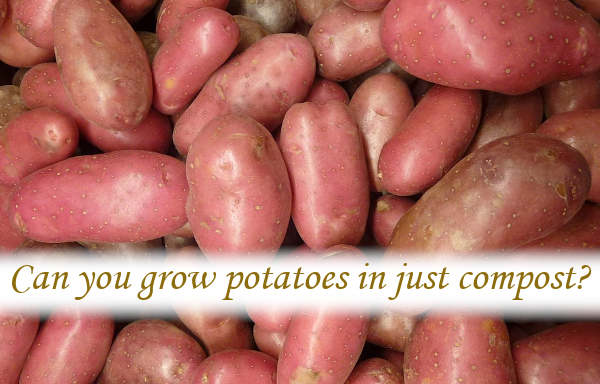 Also: Can you reuse potato compost?

How do you grow potatoes in a bag of compost?

What month do you grow potatoes?

Can you grow potatoes from peelings?

The traditional way of growing potatoes usually involves digging a patch of ground and working up the finest tilth that you can get. Light, easy-to-handle soil was, and still is, favoured for growing potatoes.

If compost is so good, as an addition to heavy soil, this leads us to ask the question: can you grow potatoes in just compost?

If you plant potatoes in just compost, they will grow. Potatoes will grow anywhere provided there’s enough moisture for them. They will sprout and grow if they’re left for too long in a paper bag.

Can you grow potatoes in just compost? Yes but it’s better mixed with soil.

Plant potatoes in a pile of, well-made, black compost and they will grow into plants. Composting food-waste, garden trimmings or anything that’s organic will provide all the nutrients that any growing plant would ever need. The only problem would be that the levels of nutrients may be too high. You can have too much of a good thing, even if you’re a potato.

Too much nutrient input, for any plant, especially in the early stages of growth, will lead to the plant growing too quickly. This leads to the plant growing taller than it would otherwise grow. A sudden fast growth will produce a tall plant that hasn’t got much structural strength. It will be tall but weak and flimsy.

Plants that do this are often referred to as ‘leggy’. A potato plant that does this may produce potato tubers but the plant won’t be as productive. An over-fed potato plant will, in most cases, fall over and become bruised.

There is, perhaps, a moral here. Too many indulgences early in life can lead to problems later on down the road. In the case of potatoes, the results would be much better if a moderated level of nutrients were applied in the early stages. This way, the plant would grow at a rate that would provide strength in structure and, therefore, ongoing security.

So, potatoes will grow in compost but they will gorge themselves in the early stages and amount to nothing. To get the best from both potato plants and compost, we need to manage the amount of compost that potatoes have access to.

We need to stick with tradition. Find a patch of ground that’s suitable for growing potatoes. Cultivate that ground as best as you can. Make a trench that’s deep enough for planting potatoes. Then apply a generous amount of well-made compost along the bottom of the trench.

About growing potatoes in just compost

The potatoes can be planted, allowing a gap between each, on top of the compost. Then cover with earth and wait for the result. Doing this will provide enough nutrients for the potato, from the compost, in the early stages of growth but it won’t be too much. The plant will grow at a speed that it can cope with. It will be of sound structure and you will have a much better chance of producing a crop of good quality potatoes.

Can you reuse potato compost?

You can reuse potato compost. Compost that’s been buried under ground with the seed potato, will break down and become reused in the soil around it. Bags of compost that have had potatoes growing in them, can be reused by just spreading it over soil and working it in.

The compost that you are likely to want to reuse is that which is left over from growing potatoes in a bag.


These are bags of compost-based mediums that have been formulated to provide the right conditions for growing potatoes. They are supplied, ready-to-use, with enough available nutrients for one crop of potatoes. You need to cut a cross-slit in the bag and plant the seed potato, there after ensure that it’s watered.

The potato plants that emerge, generally, perform well and, because a bag-system is so easy to manage, harvesting the crop is very easy to do.

What to do with potato compost

The question is: can you reuse potato compost after we’ve extracted the crop?

There’s no doubt that there will be a value in the remaining potato compost. There’s just one thing that you need to consider, having grown potatoes. Potatoes have an irritating habit of contracting blight. If you’ve been growing potatoes and you haven’t met with potato blight, you’re more than lucky.

Blight is a fungus that can survive in soil from one season to the next. Plants that are infected with potato blight need to be disposed of carefully or you risk spreading it around and causing more problems.

If you know that the potato compost had plants in it that were contaminated with blight, then you must keep this compost away from everything else. Put it in a quarantine container. To help avoid the spread of spores, make the material wet before moving it.

Be prepared to leave potato compost for a year or two before you reuse it. The best thing that can happen is that worms find their way in to the mass. They will cleanse the material of all fungi.

If you’re not keen on the idea of working old potato compost into a vegetable patch, the last resort is probably to spread it on the lawn. This will, as with a vegetable patch, improve the humus level and the worms will pull it into the ground.

How do you grow potatoes in a bag of compost?

To grow potatoes in a bag of compost, just open up the top of the bag of compost and plant a seed potato in the exposed compost. Water the compost in the bag to make it damp. Then wait for the potato to grow into a plant.

That’s what you can easily do with a bag of compost that you buy. If you want to construct your own bag or container of compost using materials that you’ve gathered, this is also easy to do.

A potato will grow in any bag or any container that has compost in it. The trick is to start with just a small amount of compost in the bottom of the container. If you are doing this with a bag, then you need to start with an empty bag with just enough compost and soil mixture to cover the seed potato.

Don’t just plant a seed potato in the top of a full bag and expect potatoes to appear lower down in the bag, there’s a bit more to it than that.

Roll the bag down, to be able to get at the bottom of the bag. Load in 2 or 3 shovels of compost soil mixture and plant the seed potato in this. Make sure that the seed potato is showing evidence of young shoots coming out. This will be an indication that it’s ready to grow into a plant.

The bag or container needs to be free-draining because you’re going to be watering this regularly. You don’t need to drown it, just keep it moist.

The plant should emerge after about a week. Then the work begins. You will notice, when you water it, that roots will appear above the soil level. These need to be covered. Add some more compost-soil mixture. Only add enough to cover the roots. These roots will produce the tubers that will become the crop.

When potatoes are grown commercially out in the field, soil is ploughed towards the growing plants. This will cover the roots from which tubers will grow.  The procedure has a variety of names. Depending on where you are it will be, hilling, earthing up or round hoeing.

This will go on for the entire time that the plant is growing until it reaches maturity.

When the plant is starting to die off, you can think about harvesting the crop. This is the easy bit. At this point you will have a full bag of compost and soil mixture with, we hope, lots of new potatoes in amongst it. All you have to do is to empty the bag and pick out the potatoes.

There are other containers that can be used for holding in the soil when growing a potato plant. Some people have had success with old car tyres. Place a tyre on the ground where you want to grow the plant and fill it with compost and soil.

Plant the seed potato and wait for the plant to emerge. Then put another tyre on top and start filling in with more soil. Keep on adding more tyres and soil until the plant reaches maturity. Then pull all the tyres away to get at the crop.

What month do you grow potatoes?

The best month to grow potatoes is May, when the soil has warmed up enough. In the Northern hemisphere, the earliest that you can grow potatoes is March. This will depend on the local climate and the amount of frost that may fall. Planting potatoes in March will provide you with an early crop.

If you would like new potatoes around Christmas, try planting during August and September. These are referred to as ‘second crop’ potatoes. Some people get bogged down over whether it’s an ‘early’ or  ‘late’. It doesn’t really matter if it’s early, late or somewhere in between, to most of us a potato is a potato. We just need to either boil it, chip it, or roast it and get it on the plate.

Can you grow potatoes from peelings?


There is no point planting potato peelings if you can’t see the sprouting ‘eye’. One sprouting ‘eye’ from peelings is enough to start a plant, in the right conditions but if there are two ‘eyes’, this can be an advantage.

In the commercial scene, It’s quite common to see pieces of potato being planted that display a distinctive growing ‘eye’. This practice makes seed potatoes go further. This goes to show that you don’t need to plant an entire potato to establish a plant.