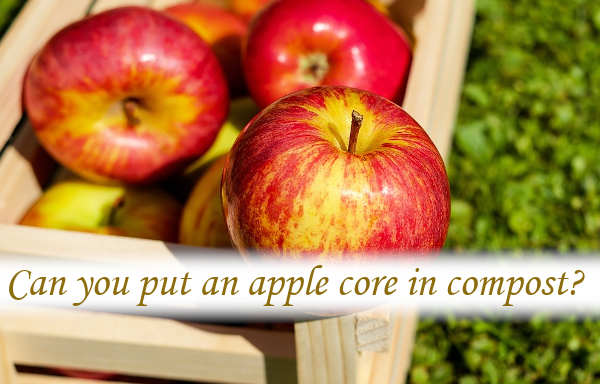 Also: Can I compost a lot of apples?

Will the pips from apple cores grow in compost?

You’ve just eaten an apple and, as usual, you’re left delicately holding the core. You’ve taken every care to nibble away ever part that you can get at. An art in itself. That firm fruit from nature’s garden has now been reduced to that bit in the middle, the apple core.

So, what are you going to do with it? You may be in the habit of just throwing it in the trash can and then deal with your sticky fingers or you may be wondering: can you put an apple core in compost?

You can put an apple core in compost along with banana peels, orange peels and any other fruit leftovers. There’s nothing about an apple core that will adversely affect compost.

If there is one item of fruit-waste that a compost heap, pile or bin is made for, it must surely be the apple core. As soon as you’ve finished eating the apple, the core will start to go brown. This is nature’s way of saying ‘where’s the compost bin?’ It’s actually the oxidising of the iron element that resides in the apple. There is no better place for an apple core than in a compost bin or, if you have one, the Rolypig.

Can I compost a lot of apples?

You can compost as many apples as your compost bin can hold but you will have to put something with it. Apples are famous for rotting before you get a chance to eat them. If you have a lot of apples in store, a significant number will end up rotting or start to rot.

These can all go in the compost. Making good compost is all about getting the right balance. Apples are a ‘green’ on the spectrum of being either ‘green’ or ‘ brown’. So, you will need to be ready to add some ‘browns’. This can be shredded paper, cardboard, sawdust or dead leaves. Doing this alone will make a big difference but you need to remember that apples are acidic.

Can you put an apple core in compost? Yes. Apple will rot quickly.

A high level of acidity in a compost heap will slow down the composting process. You can change this by adding hydrated white lime. It’s available as a white powder that’s safe and easy to use. It will depend on the amount of apples that you need to dispose of in the compost but you may need to add a liberal amount of lime.

As a guide, apply enough to just cover the apples. You don’t need to mix it in, it will find its own way.

The pips in an apple core are bad, they contain cyanide but don’t panic. If you swallow the odd apple pip, they are unlikely to affect you at all. The hard casing around an apple pip is too tough for your digestion to have an impact enough to release anything. Apple pips will just pass straight through.

If you happened to chew the pip and release anything, the dose of cyanide will be so small that your digestive system and your ability to expel toxins, will remove it.

One report that I found, claimed that you would need to chew and swallow 200 apple pips or do the same with 40 apple cores to get anywhere near a fatal dose. So, if you’ve just swallowed a couple of pips, worry ye not. Relax and have another apple.

About apple cores in compost

Will the pips from apple cores grow in compost?

There are many apple trees growing in the wild which sprouted from a pip in a discarded apple core. In most cases the young trees that try to grow this way, are either eaten off by roaming herbivores or cut off by mechanical means.

In times gone by there was one safe haven where apple trees had a bit more of a chance of surviving. The railway embankments used to receive a regular supply of apple cores on a daily basis. This happened in the days when windows on trains could be opened for throwing out apple cores.

The railway lines were, and still are, completely fenced off to prevent the larger types of herbivores from getting in. So, apple trees could grow with impunity along the railways, each having been generated from apple cores. Where does this leave us with the pips in apple cores that go in with the compost?

All seeds will germinate if or when the conditions are favourable. If you place an apple core on a compost pile and that was one of the last things that you added and then left it. Then come back two or three years later, you could expect to see a small apple tree growing out of the compost heap. After this length of time the compost will have rotten down completely and will be feeding the young apple tree.

But you’re not going to be leaving your heap, pile or bin for any significant length of time. If any seeds or pips show signs of germinating, you’re going to notice. Seedlings in the compost can be easily pulled out. Added to this, you will be constantly feeding fresh waste to the compost heap, so anything that’s trying to grow will be buried. If you’re spending any time at all tending your compost heap, you will not find an apple tree growing out of your compost.

In the Autumn/fall time of the year, you can expect to see wasps everywhere. In the earlier part of the year wasps will be busy, feeding on aphids and tending to the nest where the brewed of young grubs are developing.

At the end of the season it’s kick-out time and they all go off out scavenging. That’s when we are more likely to see them and this will include seeing them around the compost heap. If you have recently loaded a lot of apples into the compost expect to see a lot of wasps. The only advantage to this is that if all the wasps are busy around the compost, then they are less likely to be bothering you in the house.

Worms will eat apple cores after it’s gone through the mouldy stage and started to rot. Apple cores will have some of the apple fruit on it. There will be enough of it to rot and keep the worms interested.

Worms will eat the mould that will appear on any food waste including apples and apple cores. When an apple core has started to rot down, they will start to eat the actual apple core. If the pips start to rot, they will eat that as well. I put apple cores in the Rolypig composter.

One of the big advantages of putting any food waste in the Rolypig, is the massive population of worms that live inside it. As soon as any organic material has rotten down enough, the worms move in to it en masse and digest it down to a crumb.

Previous Post: Can I put dead flowers in my compost?
Next Post: Can you grow potatoes in just compost?