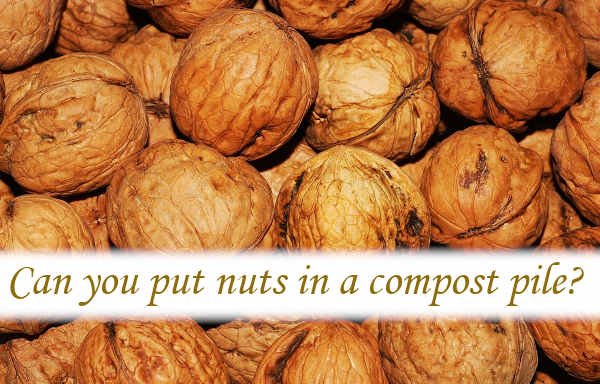 Also: Do the toxins in mouldy nuts affect compost?

What can you do with nut shells?

Nuts, for those who can eat them, are a healthy addition to any diet. Having a nut store, in the house, that you can go to when you feel like a snack is ideal for those of us who need a ‘little something’ to be going on with before the next main meal.

Nuts contain oils. This makes them vulnerable to ‘going off’. When this happens they’re not safe to eat and need to be disposed of. So, what can we do with a bad nut? Can you put nuts in a compost pile?

Nuts can be put in a compost pile. Nuts that have been removed from their shells will go mouldy and turn into compost. The only part of nuts that may not break down into compost is the shells. Some nut shells can be very hard. The best you can do is to crush nut shells before putting them in compost.

Mouldy nuts won’t adversely affect the composting process or any part of the pile. Almost everything that you add to a compost pile will go mouldy before fully converting to compost. A compost pile needs all the mouldy material that it can get.

You can put nuts in a compost pile

The first sign that nuts have gone mouldy is the appearance of a light blue mould. It’s the blue mould on nuts that’s famous for generating a toxin called aflatoxin. It’s a bad one. It’s believed to be a carcinogen.

The spores that produce mould are everywhere and all of them have the ability to produce toxins. It should be no surprise when it turns up and contaminates stored products like nuts and grains.

Some toxins are more dangerous than others. The blue mould is the one that we are more likely to see on most of the foods that we handle. A small amount of mould won’t generate high levels of toxins but we need to handle it carefully when we see it.

Can you put nuts in a compost pile? Yes. They will go mouldy and rot.

To have a chance of avoiding it, all stored produce that has a starch or oil content, needs to be stored in a dry place where temperatures remain low at all times. There is a limited time for storing these types of products.

When you have bags of nuts stored in the food cupboards you need to check the ‘use by’ dates. If the date has gone over by a few months, then, this probably needs to be thrown out. It’s not worth taking any risks because some nuts produce toxins when they go mouldy. Composting is an option for anything that’s gone mouldy.

Do the toxins in mouldy nuts affect compost?

Toxins from mouldy nuts will not affect compost. A compost pile is a very absorbing and forgiving dumping place. You can add materials and substances that may inflict a localised problem within a compost pile but this is very unlikely to affect the composting mass as a whole. A concentration of toxins in a compost pile won’t stay concentrated for very long. The mouldy stage, that generates toxins is the first of a number of stages that organic material will go through as it breaks down into finished compost.

The best place for toxins is in a compost pile

Toxins will be generated by mouldy nuts, that’s why you mustn’t eat them. There is the bad one, aflatoxin. Wherever there is mould, expect there to be whole range of toxins. The issue goes beyond mouldy nuts. If ever you come into contact with mould be aware that when you disturb it, the spores, very easily become airborne. You run the risk of breathing in the spores and in so doing, receive a dose of the toxins that go with it.

You can reduce the risk to yourself by making the mouldy material wet. This will hold down the mould spores and contain any toxins. The best place for mouldy material and its toxins is to be buried in a compost pile where it’s out of sight.

As they can get at it, the vast range of microbial life-forms, that thrive in compost, will erode everything, over time, including any residue from toxins. All organic material is food to something but you may find that some materials take longer to decompose than others.

What can you do with nut shells?

You can use a layer of nut shells as a cover that will keep down weeds. In skilful hands, walnut shells can be used to polish glass. To be able to us walnut shells , they need to be crushed using a pestle and mortar. This will render the nut shells to a powder that has abrasive properties.

If you like shelling out your own nuts, and most people do, you will have a regular pile of shells to play with. These can also go on the compost pile. It will depend on the type of nut shells that you have. As we all know, nut shells can be hard, indeed very hard, hence the need for nut crackers.

You can put nut shells in a compost pile

This leaves us to wonder if nut shells can actually turn into compost. There are some nut shells e.g. peanut shells, that are soft enough to absorb moisture and will decompose completely. There are others that are almost as hard as stones.

When we look at the nut shell of Brazil nuts, these are one of the toughest to crack. It’s difficult to imagine a Brazil nut shell ever breaking down in compost. In practice they probably don’t. Even when they have come through the composting period of months or years, they may still survive as hard shells in the soil. This won’t be a problem.

Not everything that goes in a compost heap, pile or bin, needs to turn into black crumbly compost. Nut shells are usually small, hard and cavitous. They can play a part in making compost by helping to keep the mixture open and allow air to circulate.

If you have a lot of nut shells and you really want to crush them down into the smallest particles possible, then there is a trick that we’ve picked up that may be for you. Spread the nut shells along the driveway beside your house and then drive the car over them.

You may need to go back and forth over them a few times. This seems a little extreme but it’s sure to grind them down to a grit or powder. To pick them up from the ground, you can use a broom, shovel and dustpan and brush. Or, the really easy way, clean out the vacuum cleaner or put in a new bag and just suck them up.

Nut shells will burn. Nut shells are a little more dense than wood but not quite as dense as coal. If you can get together enough nut shells, it would be possible to produce a useful amount of glowing heat.

If you are running a heating system that uses wood-chip, then be on the lookout for a supply of nut shells. You may get them for the cost of just taking them away.

Walnut shells can be used for shot blasting

While we were looking into the subject of nuts, we found out a few interesting things about walnut shells. These can go in the compost pile along with everything else. They will rot down; they aren’t as hard as some other nut shells.

Walnut shells can be used for cleaning. Dried walnut shells can be crushed to form grit-like particles that are fed into a fast-moving air blower to form, what is known as, shot blasting. This method of cleaning is one of the most extreme that you can get. It uses the abrasiveness of sharp pieces of walnut shell being blown, at speed, onto a surface that has to be cleaned.

One of the uses of, what’s known as, walnut blasting is for the cleaning away of carbon that builds up in the exhaust area of combustion engines.

A much less aggressive use of walnut shells as a cleaner is in that of hand soap. Fine crushed particles of walnut shell are mixed into soap before it’s allowed to set into solid bars. This type of soap is often used to clean hands that have stubborn and hard-to-remove substances from hands and fingers.

Finally, to end with a bang, it appears that a finely ground version of black walnut shells is used as a filler when making dynamite.

Previous Post: Can I put dog poop in my compost?
Next Post: Can you put yeast in a compost pile?