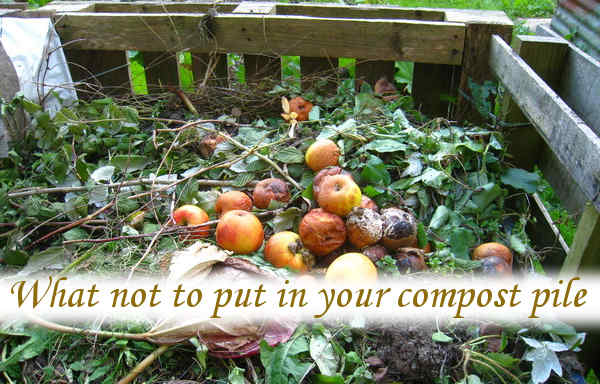 Your compost bin is an ideal place to get rid of all that messy stuff that turns up from time to time. Anything that’s obviously gone bad, mouldy or just has a whiff, can go in the compost and you can then forget about it. You’ll never see it again because nature will take care of it. Deciding on what not to put in your compost pile is not complicated.

Look at the waste that you have in front of you and ask this simple question: is this an organic item that will go mouldy and smelly if I leave it lying around? If the answer is yes then it can go in the compost. If it isn’t then you must dispose of it elsewhere.

There are things in the world that you won’t be able to make compost from and there are those that you will. I’ve been looking around to find out what the experts say about what we can make compost from. Opinions are divided. Some will tell you to avoid putting this, that and the other in compost. It really depends on how you go about managing your compost.

Some dodgy items can be composted if you know what you’re doing and it can be done quite safely without causing trouble later. We’re often told what we can’t do but let’s look at some of these wastes, consider the issues and see what we can and, perhaps, shouldn’t do.

Plastic wrappers    Those little stickers on the apples

Meat and fish    Off cuts of treated wood and sawdust

Adding lime will make a difference

The roll that worms play when making compost

This is something that we never want to handle but if you’ve got pets then it’s unavoidable. I don’t currently have any pets, so this isn’t something that directly affects me. The advice that I’ve picked up is that you shouldn’t put this in your main compost bin but instead get a dedicated composter that’s designed for this type of waste. There are in-ground composters that may be best suited for this.

The worry with this type of waste is that there is likely to be dangerous pathogens and, possibly, parasite eggs in it. In a composter these problems will disappear over time. It will all break down but it may not break down fast enough when put through a mainstream composter.

If you have a compost bin with worms working their way through the waste, then there is less of a problem because worms will digest and neutralize any harmful pathogens so this risk is removed but need to allow the necessary length of time which will be more than twelve months. The same goes for the parasite eggs. These will survive for a while but they have a limit. If they aren’t ingested by a new host, they will deteriorate and succumb to the ravages of the microorganisms and worms that are present in the compost.

If you have a compost bin system where the compost is left for a long time to fully break down, for example one to two years, and the amount of faeces waste is very small, then putting it in a compost bin should be a safe option. If I were doing this I would place this type of waste in the middle of the top of the growing heap of waste.

I’d do this so that when it’s buried by more kitchen or garden waste this slightly more dodgy waste would be in the middle of the heap where it is more likely to be subjected to any heat that may be generated in the composting process. Parasite eggs won’t survive the high temperatures that a compost heap can produce. It will also reduce the ability of the pathogens to cause problems. I would also sprinkle some hydrated lime on this to help it along. We need this to decompose quickly and lime will neutralise any acids and encourage a full and faster rot down.

Anything made from plastic needs to go anywhere but in the compost. Plastic will not rot down. If you do put it in the compost, it won’t do any harm. It won’t hinder the process. It will just ride through the system and come out the other end completely untouched. The only thing that will happen to it is that the worms will ‘lick it clean’.

If we look at the science of plastic for a moment, let’s consider this. Most plastics are made from oil. Oil was formed millions of years ago from vegetation, mainly wood, that became compressed deep down in the earth’s crust. Taking the meaning of ‘organic’ as carbon based and once living, oil is organic. It’s naturally occurring having been formed from carbon that was in the earth’s atmosphere.

So, plastic is inert and it can be argued that it’s naturally occurring. The only problem with plastic is that in some parts of the world, it’s not managed properly when it’s in the waste stage and is being dumped out at sea. This problem is a very long way from the odd plastic wrapper that you may find in your compost when digging it out to use, months after it was put in.

If or when you find a plastic wrapper in the compost, just put it in the trash can for the bin man to collect. This will go to a managed tip, well away from the sea.

3. Those little stickers on the apples

I don’t know what you think about these but I find them very irritating. Some people peel them off and then stick them to something else. Then someone else has to peel them off again to get rid of them. They are plastic and won’t rot. Keep them out of the compost bin because, if you don’t, they will keep turning up again and again when you’re in the potting shed and handling your compost.

There appears to be some concern about putting orange peel and similar fruit peel in compost. Some say that you shouldn’t put this type of waste in the compost bin. It’s true to say that these are acidic but unless you’re loading in vast quantities, it really isn’t too much of a problem. Making compost is all about striking a balance. When we gather fresh waste from the kitchen there will be a variety including vegetable peelings, cabbage leaves and apple cores etc.

What sort of people is it who only have orange peel to put in the compost bin. The fact is that when small amounts of citrus peel are added to compost, you won’t know that it’s there. And this thing about worms being killed by orange peel is complete nonsense. A compost bin that has a mass of formed and forming compost is like a universe to a worm. If they don’t like what they have right there in front of them, they have plenty of options elsewhere.

Again the hydrated lime will neutralise the acids in citrus waste and allow the process to move along.

The thing about tea bags is that the tea will turn into compost but the bag won’t. I put tea bags in my compost and I know that when I come to use the finished product that I will have to pick them out, when I see them, and load them into the trash can.

The bags are, clearly, very resilient when you leave them in a compost bin. Nothing will eat them. The worms will find a way in and consume the contents but they won’t touch the bag. They do make a good job of cleaning them out.

There is an argument that the fabric of the bag has toxins in it which you wouldn’t want in your soil. If that’s right, and I can’t think that it is, we need to worry about the fact that we’ve been putting these bags in boiling water and drinking it for years.

If you don’t want the bother of picking out the empty bags from your compost; I don’t find it too difficult, you can empty out the used tea leaves and separate the two at source in the kitchen.

The general advice here is, don’t put any scraps of meat or fish in the compost. There is a risk that the smell will attract vermin and there’s even a suggestion that bears will turn up and show an interest.

The question that needs to be asked is, how much of this type of leftovers are you likely to be throwing away. If you’re minded to put half a side of beef and a load of sardines in your compost bin, then expect a visit from all the local bears, dogs and cats in your area.

The fact is, with meat and fish prices where they are, you will probably struggle to find much more than the scrapings from plates and the occasional fish skin. These are small quantities when looked at as a proportion of all the waste that you add to your compost. All kitchen waste is food to something out there.

If you are concerned about adding this type of material then place it in the middle of your compost bin, sprinkle some hydrated lime over it then cover it with more waste which will hopefully be less appetizing to bears etc. This works for me.

7. Off cuts of treated wood and sawdust

If there is one thing that I would definitely keep out of compost it’s this. If we put aside the fact that the amount of chemical that’s impregnated into the wood is kept to the minimum that the processor can get away with and still call it treated, this is too dodgy for compost. The chemicals here are and need to be toxic. They have to be otherwise the wood won’t be preserved.


Two of the main chemicals are arsenic and cadmium. So any off-cuts and sawdust generated from building or fencing are best sent out with the trash. Don’t be tempted to burn this type of material because you and your neighbours won’t want arsenic and cadmium becoming airborne in the smoke that it will generate.

8. Adding lime will make a difference

If you have any doubts about what you are taking out from the kitchen and putting it in the compost, remember hydrated lime. Keep a bag of it near by and make sure that you store in a dry place; it will set as hard as rock if you don’t store it properly.

Hydrated lime will cover a multitude of sins. It’s safe to use and will help to create the right conditions for any organic material to rot completely and quickly. The faster you can get kitchen waste of any type to rot, the less likely you will be troubled by smells, vermin or flies.

The roll that worms play when making compost

The worms will get to work on waste as soon as the waste has broken down enough for them to be able to process it. They will take it to the ultimate level where nothing else will feel like showing an interest.

There is also a bonus, worms will consume potentially harmful pathogens that will turn up from wastes from the kitchen. This would include meat and fish waste. The worms are among the final members in the food chain when disposing of green waste. It’s unlikely that there will be much left to worry about after they have been through it a couple of times.

Previous Post: How do you speed up composting? Turn it and add hydrated lime
Next Post: How long does it take to make compost?