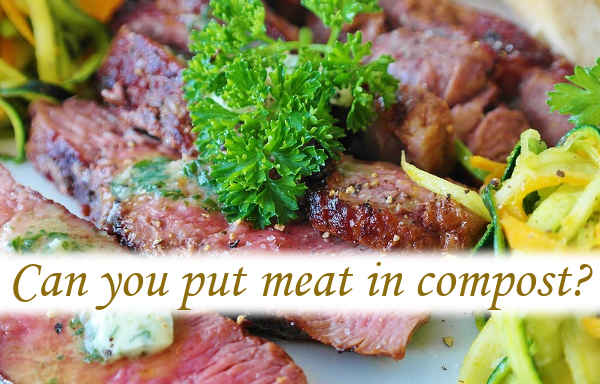 If you are running a composting system of any type you will be fully familiar with putting all things ‘vegetable’ into the compost bin. Vegetable peels, fruit peels and leftover cooked vegetables will disappear into the composting mass. The worry starts with meat. Meat is different. There’s a different set of ground rules when it comes to composting waste meat. So, can you put meat in compost?

You can put meat in compost but only in small quantities. Meat items will break down in compost. The nitrate levels in meat are high because of the protein. Carbon-based ‘browns’ will balance the nitrates in meat. If you put meat in compost you need to add hydrated white lime to reduce acidity and deter rodents.

The meat that turns up on our plates is, usually, the most expensive element. From my own experience, and those around me, the quantities of meat that are left over are so small that we have to wonder why the question is being asked. Let’s hope, for everybody’s sake, that there aren’t too many out there who find themselves throwing out a whole joint of meat.

Can you put meat in compost? Yes, in small amounts. Use white lime.

Small amounts of cooked meat aren’t going to be a problem. When we start a compost pile, heap or bin, we know that whatever we put in there, is going to be in a heap that we won’t be touching for several months. We can be sure that in those ‘several months’ everything that needs to happen to render the whole mass down into finished compost, is going to happen.

Whatever composting system you run, it’s out of sight, out of mind and we can let nature do its thing. A small amount of cooked meat will break down quickly. It won’t hang around long enough to attract scavenging predators. A small amount won’t generate enough of a smell to announce its presence.

What about raw meat?

Raw meat is a different issue. If you are unlucky enough to return home from being a way for a while and discover that your deep freezer has decided to conk out while you were away, then you may find that you have a problem.

Depending on how long things have been thawed, you may be able to salvage some things, including the meat. Few of us would be lucky enough for this to be the case and we should probably take the view that most items, particularly meat, will have to be discarded.

It would not be practical to load quantities that would amount to the entire contents of a deep freezer into any compost bin. It would be too much turning up in one go. The concept of composting is that you add small amounts of waste, regularly, over a long time.

The best thing you can do if you have a deep freeze ‘conk out’ event and you suddenly find yourself with a large load of reject food that either is meat or ready meals with meat in it, is to contact your local council services. They should have some ideas to help you deal with the problem responsibly. The best solution must surely be to take it to an incinerator where it can be disposed of decisively.

What can I add when meat goes in the compost?

The simplest addition you can make to any compost heap, pile or bin is hydrated white lime. It covers a multitude of sins in the world of compost making. The main purpose of white lime in compost is to reduce the level of acidity. The rotting process generates acids. It’s a natural bi product of the process. The problem with this is that acids tend to preserve when we are trying to get things to rot.

White lime will correct this. All it takes is a light sprinkling every time you feed anything into the composter. This way there will be a good distribution of lime throughout the mass as a whole. With a lower acid level, organic material will rot much more quickly, because it isn’t being preserved, and any meat or bone items will be less appetising to scavenging predators if it’s covered in white lime.

Can meat and bones be composted?

Small amounts of meat will break down into compost over time but bones will never break down. At least as far as any viable composting timetable may be concerned. This isn’t to say that you can’t throw the odd bone in with the compost.

I’ve put the odd remains of a turkey leg in the Rolypig composter and seen a clean bone emerge at the other end. There’s no evidence of vermin getting into the Rolypig. The main points here are that the bone was buried in the mass of compost when the the Rolypig barrel is rolled over and I add hydrated white lime regularly. This is what you have to do. Provided you take precautions and manage your bin, you can get away with putting bones from the table in the compost.

Is it normal to have maggots in compost?

It’s normal to have maggots in compost but…

You will see all manor of slithery creatures in your compost. Sometimes it’s better not to look too closely. Among the diverse population of everything that finds your compost bin attractive, you will often find maggots. They don’t cause any problems or hinder the composting process. It could be argued that they are doing some good. They will be digesting some of the organic waste that you want to break down. In this sense they are as useful as worms.

…maggots in compost can be a nuisance

The only problem that you may have is that every maggot will hatch into a fly. This is when they can become a nuisance. Extra to this, you may not be happy about seeing maggots in your compost every time you go to take fresh waste to it.

You can prevent maggots from thriving in the compost. Firstly you must understand why they are there. They are not feeding from the compost portion that the worms thrive on. The two aren’t in competition. Maggots will eat meat when it’s started to rot but they don’t need to wait until it’s rotten down to a degree where they can digest it, like worms do.

They only go for the ‘greens’ portion and meat, if it’s there. For maggots to have the secure food supply that the contents of a compost bin can provide, the ‘greens’ need to stay as fresh for them as possible. If it rots down quickly, there won’t be anything for them and there will be very few, if any, maggots in the compost.

This is where hydrated white lime will make a big difference. The adding of white lime as you build the compost mass will ensure that the organic waste, that the maggots crave, will rot down too quickly for them. Their preferred habitat of plenty of semi-preserved organic waste won’t be there.

If you see maggots, you need to take action

If you see a lot of maggots in your compost and the accompanying flies that go with them, this should be taken as an indication that your compost isn’t rotting as fast as it should. It will probably be acidic and, therefore, preserved. When compost is in this condition there is usually a foul smell; another factor that attracts flies to lay their eggs that hatch into maggots.

There are no maggots in the Rolypig composter

If any of this is familiar to you, don’t think that you’re the only one who’s seen it. It’s a common problem that can be easily remedied. I add lime regularly to the Rolypig composter. There are no signs of maggots at all. The only flies are fruit flies, these tend to turn up if there’s been a sudden input of fruit pulp that’s been pressed for the juice.

No maggots and very few flies in the Rolypig composter

There is no bad smell and the compost that comes out at the back end shows every sign that it has been agitated enough, it’s not acidic and the mass of worms that reside within have made good use of everything.

Worms will only eat organic material that has reached a stage of decomposition where it’s soft enough for them to chew and ingest. They can’t eat meat until it has broken down enough for them. This will happen. They will eat the residue of the remains of meat after the moulds and microorganisms have had a go at it.

This stage of the entire process will be assisted by the inclusion of hydrated white lime. It will create the best conditions for mould and microbes to perform quickly and efficiently. The white lime will also be of use to the worms. When they consume, whatever remains of any meat or anything else, they will ingest the fine particles of lime. These particles are abrasive and while they mix with the food in the worm’s digestive tract, they help with the physical breakdown of organic material into worm casts.

Can you put meat in bokashi?

The bokashi bucket is, in many ways, one of the best places for meat scraps. It could never be advised to put large amounts of meat waste in a bokashi bucket. To do so would overwhelm the system and there would be problems.

However, bokashi treating of any waste should be seen as an interim stage. At some point the contents of the bucket will need to be removed and put through the next stage which will turn it into compost.

Because of the high level of acidity in bokashi, the bucket contents will need a severe dosing of hydrated white lime to neutralize it. When this is done, there is no reason why it can’t turn in to a good quality compost, regardless of the fact that there are meat scraps involved.

Can you put Citrus in compost?

Can all food waste be composted?

Meat on a plate