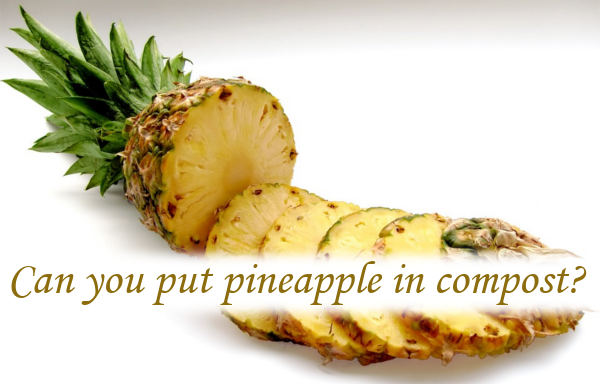 Of all the citrus fruits, pineapple has to be one of the most tangy. As fruits go, I say, it’s in a league of its own but here we’re looking at composting and the question is going around, can you put pineapple in compost?

You can put pineapple in compost but you will need to add hydrated white lime to reduce acidity. Pineapples contain citric acid which preserves rather than allow decomposition. For pineapples to turn into compost quickly, the citric acids need to be reduced. Cut pineapple into pieces when making compost.

If you’re putting pineapple in compost…

Hydrated white lime will directly react with any acids from whatever source, including that of a pineapple. A pineapple in the compost will not be a challenge to hydrated lime. When the acidity has been reduced, decomposition will resume from the temporary period of preservation. Anything that’s acidic in a compost heap will remain in a state of being preserved until the acidity is, somehow, diluted to a low level or until there is intervention in the form of adding hydrated white lime.

The best compost is made using hydrated white lime

How to get the most out of a pineapple

There are parts of a pineapple that are highly desirable and, fortunately, edible. There’s skill required to recover as much of the best parts of a pineapple as we can and there appears to be a variety of ways to do this. Each involves the careful use of a sharp knife.

Can you put pineapple in compost? Yes but add white lime.

It’s a departure from the subject of making compost from a pineapple but take a look at this video by Norio Matayoshi. He explains, in a much better way than I can, an easy way to cut up a pineapple. Take note that he is experienced with a knife.This way of cutting will keep waste to an absolute minimum, reducing the amount of pineapple waste that you will have to turn into compost.

There are a number of videos out there that explain how to do this. I selected this one because he uses a particularly interesting tool for cutting out those points where the pines are.

Is it Ok to eat the core of a pineapple?

Looking into this, there appears to be a big argument going on. Some claim that it’s bad for you while others say that they’ve been eating the core for years and there’s been no ill effect.

The core has been shown to contain the usual range of vitamins. All those that are supposed to help with your immune system.

Then, there’s something called Bromelain. It will apparently reduce the risk of blood clots, otherwise known as as anticoagulant. It is also credited with having anti-inflammatory properties. The claims continue with Bromelain helping to ease skin infections, healing bruises and wounds.

Further investigation has revealed that Bromelain is an enzyme and it’s used as a meat tenderizer. But it’s OK because it’s not seen as being particularly toxic. You just have to make sure that you don’t consume large quantities of it because you may experience swelling and soreness in the mouth.

So, do we eat the pineapple core? If you haven’t, you may want to give it a try, it may work for you. If you start to feel, in any way, unwell be ready to give it a miss. I have tried it myself and I’m still standing upright. But I don’t think I’ll make a habit of it because it’s hard to chew and I can’t be bothered with it. I just want to eat the best part and keep everything simple.

Can you eat pineapple skin?

Well, yes you can chew it and ingest it but do you really want to? The whole point of cutting off the skin is to get at the best part. The skin is the tough, hard protective outside that may have something good about it if you can digest it. But having cut it away to get at the tasty part inside and then start paying attention to the hard, ugly skin, is a bit like taking a pizza out of its box and then wondering if you can eat the box.

Can you grow a pineapple from a top?

This is something that I’ve heard about and want to try. I somehow got the idea that you can go to the supermarket, buy a pineapple bring it home, cut the top off and grow another pineapple from it. Having no idea of whether this is worth trying or not, I’ve been looking around to see what others are saying on the subject.

It appears that the answer is no, this won’t work, or may be a fruit will emerge for your efforts but only after a very long time. The concept of ‘buy- one, grow-one-free’ will have to remain a fantasy, for now.

This doesn’t mean that you can’t do anything else with a pineapple top. You don’t have to chop it into pieces and put it in the compost bin. By all accounts it’s possible to generate an attractive ornamental plant from a pineapple top.


This is when nature can be amazing. You can cut the top from a pineapple, stick it in the ground and it will grow roots from the cut face. It may not be quite as easy as that. One suggestion is to allow the pineapple top to dry for up to a week as this will avoid rooting problems.

Others suggest placing the fresh cut top in a shallow dish of water and roots will start to form. When the roots start to appear, you can plant it in soil. Some have had success from just planting the top straight into soil and give it a good watering.

Whichever way you try this, it will take a month or two before you will see much rooting. Don’t over water as this may rot the developing plant. Allow it to dry between watering sessions.

Then there’s the trick with an apple or banana. An established pineapple plant may not turn into an actual pineapple but it does offer the chance of a bloom. Don’t hold your breath, it won’t happen for two or three years but there’s something you can try. The introduction of ethylene appears to have the effect of stimulating flowering.

If you don’t ever get a pineapple or a bloom from it, you will have a leafy tropical plant that you can look at and tell everyone about.

Can you put Citrus in compost?

Can all food waste be composted?