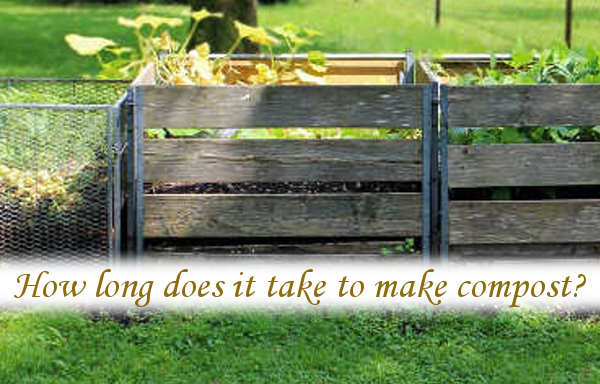 Many of us take the view that all our waste can be put in a trash can and sent away to become someone else’s responsibility. There are many who would make use of this waste but they have questions about how to go about it. One of the main questions is how long does it take to make compost?

It’s possible to make compost from kitchen waste in as little as 16 weeks. This can happen if you aerate the compost by tumbling. The adding of white-lime and inclusion of worms will make a big difference. If you don’t aerate or tumble, expect it to take 1 to 2 years for it to make compost.

If you’re planning to make compost from garden waste, think in terms of one to two years. Making compost is not complicated but you do have to allow for nature to work. It may take a long time but here we will look at the procedures and what you need to do to produce a good quality compost.

The importance of turning composting

What can you add that will accelerate composting?

Why you must shred garden waste

Don’t expect too much too soon

One of the biggest mistakes that people make when starting to make compost is that they expect finished, usable compost to appear in just a couple of weeks. This can’t happen. The rotting process that produces compost will be well under way after two weeks but it isn’t realistic to expect a black crumbly sample that looks like potting compost.

It’s better to leave it well alone in the early stages for a number of reasons. Kitchen waste is food-waste and is a host to potentially harmful pathogens. These can be disease-causing and must be avoided. You may also notice in the early stages of the rot down, the appearance of moulds.

How long does it take to make compost? 16 weeks in the Rolypig!

This is usually the first thing that happens. It will depend on the conditions being exactly right for this to happen. If the moisture level is too high then it won’t happen at all to begin with but it will happen later as it dries out.

The important thing about mould is that you mustn’t handle the forming compost at this stage. If you disturb it you will release fungal spores into the air and you run the risk of breathing it in. This is bad for the lungs and, if exposed to it regularly, you may suffer from respiratory problems later.

Be ready to wait, what’s the hurry? There are ways of speeding the process and there are naturally occurring additives that you can use that will create the ideal conditions for making compost. It really depends on you and what you want to achieve. The easiest and most simple method of all involves setting up a compost bin, in an undisturbed part of the garden, and just fill it with kitchen scraps as they become available.

While you are doing this the first bin contents are quietly rotting down and you you won’t need to do anything to it. This approach will provide you with a good quality compost after two years. There are ways to speed up the process but these require some intervention from you but it needn’t be complicated or involve too much extra work.

To help the contents of a static bin to rot faster you can use an aerator probe. This involves pushing a specially designed probe down into the compost in the bin, then pulling it up and twisting it as you pull. The aim here is to agitate the entire contents of the bin by repeatedly pushing in the probe. This will introduce air into the mix which will almost be as good as turning the forming compost over.

The importance of turning compost

The most effective physical intervention that will speed up the composting process is to simply turn the heap over. You don’t need to do this every day. Once a month will be enough. By turning the whole mass over you will introduce air into it. The bacteria and general population of microorganisms that are responsible for converting fresh kitchen waste into compost, need air.

If you regularly dig over a heap then the microorganisms will flourish and respond. If you do this with a heap of lawn clippings two or three days after the heap has been made, then you will see steam rising. This will be the entire range of assembled microorganisms in action, starting the process of feeding on the grass clippings and breaking them down.

The heat that produces the steam is an indication that the conditions are just right for the microorganisms to multiply very quickly and start breaking down the organic matter in the heap. This doesn’t mean that the mass will turn into compost any quicker, this is just the first stage. It will need time for the microorganisms to take it through to a completely black and crumbly compost.


By turning the heap over you will be mixing in more air which will help the microorganisms to keep breaking the grass down until there is no feed value left for them to work on.

Turning over kitchen waste will not respond as dramatically as the grass. Kitchen waste is best left for at least a month before you turn it. There will be enough air available in the mass in the early stages and, because of the moulds that may be generated, it’s best left undisturbed.

Some will tell you that for compost to form, there has to be heat. This will happen when making compost from grass clippings but heat generated from just kitchen waste will be much lower because the moisture level in the middle of a heap will be too high. There will be evidence of mould on the outside where the material has dried enough for mould to take hold.

Physical digging over using a garden fork is one way of opening it up. If you have a static compost bin, you can dig it out from the bottom and place it in another empty bin. Moving the entire contents of one full bin into another would be a very effective way of turning over compost.

Then there are compost tumblers. There is a huge range of these available out there. Most of them do the same thing. You don’t need to roll them over every day. These are designed to make the turning process easier and they can’t fail to be effective.

When you roll over a compost tumbler, all you need to do is to aim for a 180 degree turning of the material inside the barrel. Doing this, the contents will be upside down compared to the previous position. The drier material on top will then be at the bottom. The wetter material that was at the bottom will be on top. Any moisture from the base of the mass will soak down through to the base and be retained in the mass as a whole.

The turning process alone will make a huge difference to the speed and quality of the compost that you make. This will be a batch system just like the static bins. You will be regularly adding fresh waste to the tumbler which will mean that the contents will be a thorough mix of old and new.

You can’t remove fully made compost from the barrel until the whole contents have rotten down to a constant consistency. It would be an option to remove the entire contents, whether finished or not, and load it into a static bin and just leave it there to quietly finish off by itself. Because sufficient agitation has occurred in the early stages, this is often enough to speed the compost making process to make a good quality compost.

What can you add that will accelerate composting?

One of the most effective additives that will accelerate the conversion of organic waste into compost is hydrated lime. The fresh waste that you’re trying to convert will generate acids which have the tendency to preserve rather like pickling. We need the opposite, so adding hydrated lime will neutralize the acid. With the acidity removed there will be nothing to stop decomposition.

Hydrated lime is available as a white powder. It’s safe to use, relatively cheap and you only need to add about one tablespoon of it per week to a static compost bin or tumbler. It will also carry on through to be of benefit to the soil when you eventually put the compost on the ground as plant feed. Many plants benefit from the input of lime.

There are some plants that don’t require lime and function better without, so you need to be mindful of this when you’re making compost as part of a garden plan.

There are other, more direct, additives that will break down waste very quickly but they don’t turn it into compost by themselves. These are cultured bacteria additives which are absorbed onto a dry medium. They are available in powder form and they do work. The only downside is that they generate acids which we are trying to avoid. If you use any of these, be prepared to add some lime to neutralise this source of acidity. Working the two added ingredients together does take a little extra management but I’ve seen it work.

Why you must shred garden waste

Small particles rot faster than large. There is a much bigger surface area for the microorganisms to work on if everything is either shredded or chopped, So, chopping of kitchen waste will make big difference. It won’t take too much effort and the waste will take up less space in the kitchen caddy.

As for garden waste, with the exception of lawn clippings you will need to shred hedge trimmings which tend to be long and difficult to load into a bin or tumbler. Shredding this will mean that you will have a material that will take up much less space in the mass of compost and you can be sure that it will rot faster.