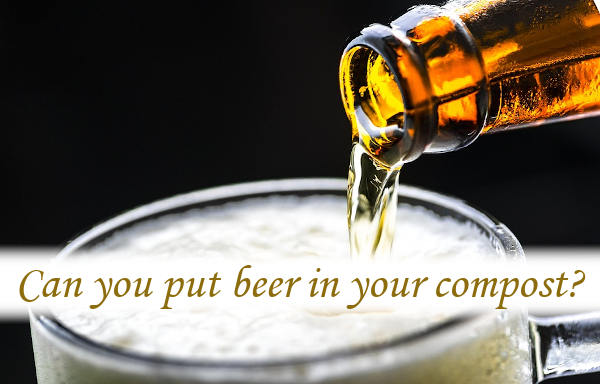 I can remember a time when a group of blokes would go on a ‘Stag do’ and because they had nothing sensible to talk about, the focus of attention would fall onto beer. They would drink it by the bucket full. Not a drop would be wasted. Then, there would be the ‘bragging rights’ of ‘who drank the most’. Subject-material that would keep them talking for months.

Now, all that appears to have changed. These days there is ‘left over beer’. We’ve become more refined we take a few sips and don’t want the rest. This is heresy to some but what happens to all the beer, that’s left over? All this leads us nicely to the question: Can you put beer in your compost?

There are those who will tell you that the best way to dose your compost with beer would be to drink it first. This has always been an option. The clinically minded, out there will tell you that urine contains urea. This is one of the most soluble sources of nitrates that you can get. It can be classified as a ‘green’.

Compost that’s being made from garden waste that tends to be lawn clippings and hedge trimmings, needs all the nitrates it can get. So, that’s one way of doing it.

But, we have all this waste beer and we’re going to pour it onto the compost. What do we think is going to happen? Well, nothing spectacular, some froth may show up as it disappears into the mass and that will be that.

But there’s more. You can’t see it from where you’re standing but a dose of beer will actually start to work as a compost accelerator. It’s all to do with the yeast element in some beers. This won’t be relevant to all beers. Some beers are pasteurised, these will have no effect on compost except add extra moisture.

Yeast in beer is what gives it that brewed character, taste, smell and most important of all, the alcohol. Put yeast in compost and it has a whole new meaning.

Yeast, for all that it does to a decent pint of beer, is and always will be, a fungus. When we pour beer into compost, any free yeast that’s available, gets a chance to do what any other fungi does.

Can you put beer in your compost? Yes. The microbes won’t get drunk.

No longer shackled to the regimented procedure of merely converting sugars into alcohol, in a composting mass it can now ‘run riot’. It will attach itself to any substance that it can feed from. In compost there is a wide variety of material to work on. Yeast will work on what it likes and it will be completely out of control. A compost heap is paradise to the yeast in beer.

About beer in compost

So, what happens to compost when exposed to the yeast from beer? The first stage of decomposition involves the actions of fungi, usually in the form of mould. Yeast fungi are among the most rampant fungi. It will out-run almost everything else in the race to work on composting materials that provide what it needs. Nutrients will be quickly and efficiently released.

A significant influx of fungi that can do all of this, whether it’s from yeast or anywhere else, is going to be noticed. Your compost may well break down faster than you may have expected.

The volume will reduce considerable and with the inclusion of worms, which will happen naturally if the conditions are right, will reduce your compost to a dense mass of dark compost crumb. If putting beer in your compost achieves all this for you, it’s going to be a toss-up between: ‘Do I drink my beer?’ or ‘Do I go for the extra entertainment of pouring it in my compost?’

Is beer good for soil?

Can you believe it? There have been trials done to see if beer is any good as a fertilizer. Call me old fashioned but I always thought that beer is brewed for drinking but only in small and moderate quantities.

Trials have, apparently, been done at the University of Minnesota. All of it done under controlled conditions. The idea that beer can be used as a fertilizer has been around for more than a century. There was a recommendation that the used-hops, from the beer brewing process, could be used as an effective fertilizer.

This, somehow, led people to think that there was a logic in using the brewed beer as fertilizer. The belief has been that beer contains a range of vitamins and minerals that benefit plants and microorganisms in the soil.

So, what is it that’s in beer that’s supposed to help? Analysis of beer shows that it contains water with dissolved carbon dioxide. There will be alcohol in the form of ethanol and sugar or a selection of carbohydrates. There will be a minute amount of protein that will contain a nitrate element.

An experiment was done to see how plants performed when fed with a solution of beer in water. This was done using a hydroponic method of growing to negate any variation that soil may have. Some liquid fertilizer was added to the solution to equate to the level of nutrients that would be found in soil.

The alcohol in beer proved to be a problem to the plants. It was also discovered that beer with no alcohol was bad for plants. In the test it was shown that the plants that were grown without any beer involved but had access to the same amount of fertilizer, fared the best.

There were also conclusions drawn about the yeast in beer being of use to soil. It was concluded that yeast fungi can find its way into soil from a number a natural sources. Adding beer with a yeast element doesn’t bring anything extra.

The ultimate conclusion was, to most peoples’ relief, beer is brewed for drinking and it would be a total waste to even think about using it as a fertilizer.

I’ve never tried to kill weeds using beer. If there’s any element in beer that will affect weeds, it will be the alcohol factor. It is unlikely that there will be enough alcohol in most beers to make it a viable option for killing weeds. You would probably have to use a lot of beer to have a chance of killing weeds. If you keep on applying beer to anything, including us, you will probably make it ill.

If you’re thinking of using alcohol as a way of killing weeds, there is much talk of using rubbing-alcohol. This is more widely known as surgical spirit. It’s one of the purest forms of alcohol that you can get. It works by dehydrating the weed. A diluted solution is advised when spraying. Put 1 pint of water to 1 tablespoon of rubbing alcohol (surgical spirit). You need to soak the weeds thoroughly but avoid wanted plants.

Beer will kill slugs when they’ve had enough to become so drunk that they fall into it and drown. Armed with this knowledge we can make a deep-enough container that will hold enough beer to attract them. Slugs will find it and start drinking before falling in and drowning.

There are plenty of house-hold containers that can be used for this. It doesn’t need to be very deep, just deep enough for a slug to drown. So, a plastic drinking cup or cut the top from a bottle to leave a shallow base. This needs to be set into the ground but don’t place the top of the container at ground-level as this will allow crawling beetles to fall in.

Slugs will climb up almost anything, especially if they smell beer. Place the lip of the container about an inch above the soil level. You will need a number of these traps to have any meaningful effect. Space them out in the ground, leaving about a metre between each.

To give the traps extra potency, add a sprinkle of yeast to the beer. Stir it in. This will send out more of an attractive smell to slugs and snails.

Keep them covered where possible. Rain water will dilute the beer. The traps will need to be emptied and refilled once or twice a week to ensure that the beer is fresh bait.

Can you put wine corks in compost?

Wine corks can go in with the compost but you need to look closely at the ‘corks’ that your handling. There are modern ‘corks’ that aren’t made of cork. Some corks are made of plastic. This isn’t a serious problem, it just means that a plastic cork will survive the full time that it spends in the compost and will emerge completely unscathed. Unless you can find a use for them, plastic corks may have to go to landfill.

As for the genuine articles, these will rot down when put in compost. It will help if you cut them into small pieces. Cork is derived from the bark of a tree called Cork Oak. Also known as Quercus suber; it’s an evergreen oak.

The good news is that no trees are harmed in the making of a genuine cork. They aren’t cut down to retrieve the bark. The bark grows to be very thick and is harvested periodically.

A cork, being wood, is a carbon ‘brown’. If you, and those around you, drink a lot of wine and you generate large numbers of real corks, these can go in the compost. You will need to treat these as you would dead leaves, cardboard and paper. You need a nitrate source to make a balanced mixture. A good source of nitrates is from food waste.

Previous Post: Can you put yeast in a compost pile?
Next Post: Can I put dead flowers in my compost?